De-Fox is a shelf-stable, manufactured bait for fox control which can be stored at room temperature. It is made from animal liver(80%) and muscle tissue (20%). Liver has been a traditional bait substrate in Australia since European settlement and has a long record of successful use.

The European red fox was first released near Melbourne in 1855 for recreational hunting. Within 50 years, it had spread into Western Australia. By 1893 some shires in Victoria had a bounty on foxes indicating that they were quickly considered pests. New South Wales soon followed suit. Although not established in Tasmania, foxes are now found on most of the mainland, except in the tropical regions of the far north. It is not clear whether the climate or higher concentrations of dingoes have limited their spread in these parts. Today the fox is one of the most widely spread feral animals in Australia. Foxes have been in Australia for over 120 years and in this time have played a major role in the decline of native fauna. Foxes can survive in many different habitats ranging from arid through to alpine as well as inner-urban areas. Foxes appear to be most abundant in lightly wooded areas typically found in agricultural landscapes; these habitats offer a wide variety of shelter and food. Foxes are predominantly carnivores although they do eat insects and wild fruit, particularly in summer when their preferred prey is less abundant. In pastoral regions of Australia where these prey are scarce, foxes eat small native mammals. Foxes breed once a year with cubs born during August and September. Although Fox predation is considered to be a major threatening process to the long-term survival of a range of Native fauna, foxes have few natural predators and they rarely live beyond four years old. Fox mortality is influenced by shooting, trapping and road accidents as well as the effect of drought on the numbers of their prey. However, this alone is not enough to control the damage that is being caused by foxes.

Twice a year control is a realistic option, however while control in autumn will reduce the peak fox numbers, those which remain or reinfiltrate will have a few months to re-establish breeding pairs prior to mating and whelping in late winter. Each female has the potential to wean four to five cubs per year, so foxes can repopulate an area of control within one or two seasons if breeding nucleus remains. Twice yearly control will be expected to have a marked effect on peak numbers in autumn, and will reduce the pool of young breeding foxes. We should consider a twice-yearly program with at least one of the control times directly aimed at disrupting the breeding in winter or early spring if numbers are to be progressively reduced.

Sodium mono-fluoroacetate or 1080 is the synthetic sodium salt of the naturally occurring mono-fluoroacetic acid. It is an odourless; virtually tasteless sodium fluoroacetate and is very toxic to aquatic organisms. This product is biodegradable. It will not accumulate in the soil or water or cause long-term problems. After baiting has been completed, carcasses should be collected and either burned or buried as secondary poisoning is likely when predators or scavengers eat carcasses. Once eaten by the fox, fluoroacetate poison is absorbed and blocks enzymes for energy production within the cells of the animal. After a delay of several hours, death occurs quickly from the loss of energy to the brain, heart, and diaphragm 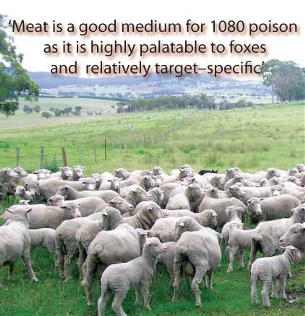 What is the Best Method for Controlling Foxes?

There is a world of difference between the concept of just killing foxes and the concept of effective control. In many cases, it is possible to remove large numbers of foxes without having any real effect on long-term population size. Spotlight shooting, for instance, often just ‘harvests’ foxes – it does not control them. “Control” implies that we remove sufficient animals to seriously deplete breeding potential in the following year. During the years of high skin prices, huge numbers of foxes were shot in southern Australia without any noticeable decline in population size (although population age structure may have been altered).

Experience has shown that while techniques such as spotlight shooting, driving before guns, and den fumigation can kill large numbers of foxes, they are usually limited in scope such that re-infestation is rapid. The only COST-EFFECTIVE way to quickly reduce fox numbers SIGNIFICANTLY on broadacre farmland is via the deployment of toxic baits. This is generally agreed by both Commonwealth and State Pest Control Authorities.

De-Fox is a shelf-stable, manufactured bait for fox control which can be stored at room temperature. It is made from animal liver (80%) and muscle tissue (20%). Liver has been a traditional bait substrate in Australia since European settlement and has a long record of successful use. The toxin, 1080, is already delivered at the correct dosage (3 mg) in each bait.

Identification of The Material and Supplier

Because De-Fox is a dried meat bait, it is naturally attractive to foxes. The baits have a long shelf life (12 months) but decompose naturally in the field after several weeks so as to minimise the risk of non-target poisoning. Unlike fresh meat baits, De-Fox will not disintegrate too quickly in hotter weather. Fresh meat baits can sometimes lose their effectiveness in the matter of a few days. Because De-Fox is a ready-to-use product, the need for licensed and qualified personnel to inject toxin into the bait is obviated. With fresh meat bait, loss of some injected toxin can be a problem because the toxic solution is often injected under some pressure and can seep out through damaged tissues. De-Fox baits are pre-drilled to accept the injecting needle and all toxin is readily absorbed in the centre of the bait.

How and When to Deploy Baits

Baiting recommendations may vary from State to State and you should always check with your local vertebrate pest control officer if uncertain. In general, we recommend that baits should be placed at least 300m apart in a small mound called a ‘bait station’. Burial of baits does not reduce their effectiveness and helps with target specificity (most other carnivores have a poorer sense of smell). Recommended depth of burial varies and you should read the literature supplied by your local pest control authority.

It is very important to aim for a co-ordinated control program – localised control is often ineffective because cleared areas are quickly repopulated from neighbouring farms. There are always more foxes than there are fox territories!! Large-scale programs prevent rapid re-infestation. Talk to your neighbour! Autumbaiting, several weeks before lambing is the traditional time chosen in Australia. At this time too, food is generally scarcer and young foxes are often dispersing into new country. A second round of baiting in August-Sept. might also be appropriate to take out pregnant females before they ‘go to ground’ and whelp. Baiting in late Spring and summer may be less effective.

What is caching and is it a problem?

‘Caching’ refers to the habit, in all canines, of burying excess food for later use. The extent of caching in the case of fox baits is unknown. We do know that it can occur with all bait types. If large numbers of baits are being removed consistently over a long time period, caching could be part of the problem. Presumably, cached food is later eaten and, provided the time lag is only weeks and not months, De-Fox baits should still kill the target animal. If you suspect that caching might be a problem, the baiting campaign could be extended for a longer period. Also, post-control assessment (spotlight counting) should be delayed for many weeks. This will allow foxes time to dig up and eat their ‘buried treasure’!