Impact on the Environment and Agriculture

The wild dog is a serious predator of sheep, cattle and other livestock in areas of Queensland; New South Wales, Victoria, South Australia and Western Australia up to 30 per cent in some areas. Wild dogs/ dingoes are regarded as serious pests, wild dogs/dingoes, either alone or in-groups, sporadically attack sheep flocks and may kill or maim many sheep in a single attack. They prey on native mammals and birds and may also compete with native predators, such as quolls, for food and other resources.

The usual breeding season of dogs is autumn to winter. Females are sexually mature at 2 years and come into oestrus only once a year. Mating usually takes place between April and June. Litters are usually whelped between June and August, after a 63 day gestation period. However, in Victoria some litters may be dropped as early as April, or as late as September. Litter size varies from one to nine and the mean litter size is approximately five. Females from one litter may stay in the group and assist in raising the next years litter. This may lead to the establishment of family groups. Dominant females can cause suppression of breeding in sub dominant young females. 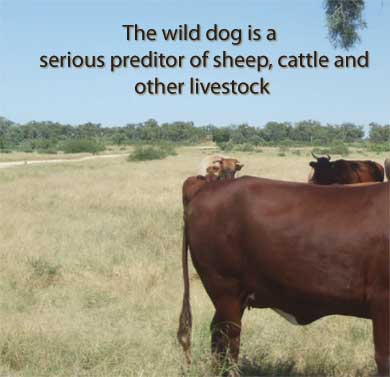 Because De-K9 is a dried meat bait, it is naturally attractive to Dogs. The baits have a long shelf life (12 months) but decompose naturally in the field after several weeks so as to minimise the risk of non-target poisoning. Unlike fresh meat baits, De-K9 will not disintegrate too quickly in hotter weather. Fresh meat baits can sometimes lose their effectiveness in the matter of a few days. Because De-K9 is a ready-to-use product, the need for licensed and qualified personnel to inject toxin into the bait is obviated. With fresh meat bait, loss of some injected toxin can be a problem because the toxic solution is often injected under some pressure and can seep out through damaged tissues. De-K9 baits are pre-drilled to accept the injecting needle and all toxin is readily absorbed in the centre of the bait.

How and When to Deploy Baits

Baiting recommendations may vary from State to State and you should always check with your local vertebrate pest control officer if uncertain. In general, we recommend that baits should be placed at least 300m apart in a small mound called a‚ ‘bait station’. Burial of baits does not reduce their effectiveness and helps with target specificity (most other carnivores have a poorer sense of smell). Recommended depth of burial varies and you should read the literature supplied by your local pest control authority. It is very important to aim for a co-ordinated control program – localised control is often ineffective because cleared areas are quickly repopulated from neighbouring farms. Large-scale programs prevent rapid re-infestation. Talk to your neighbour! A Twice year baiting program to target adults during peaks in activity associated with breeding (April/May) and then again in August/September to target pups and juveniles.

What is caching and is it a problem?

‘Caching’ refers to the habit, in all canines, of burying excess food for later use.  The extent of caching in the case of fox baits is unknown.  We do know that it can occur with all bait types.  If large numbers of baits are being removed consistently over a long time period, caching could be part of the problem.  Presumably, cached food is later eaten and, provided the time lag is only weeks and not months, De-Fox baits should still kill the target animal.  If you suspect that caching might be a problem, the baiting campaign could be extended for a longer period.  Also, post-control assessment (spotlight counting) should be delayed for many weeks.  This will allow foxes time to dig up and eat their ‘buried treasure’!

Identification of The Material and Supplier